When we crossed the border between India and Nepal, one of the first sights that greeted us was a massive vulture circling over a sandy river bed. It was the first vulture I have seen in the wild and an impressive sight, all the more important because of the severe decline in vulture populations in India and Nepal in the past 25 years. One species of particular interest is the Oriental White Backed Vulture; in the 15 years up to 1997, their population declined by 99.9%, to the stage where they are teetering on the brink of extinction. The decline has been caused by the prolific use of an anti-inflamatory called diclofenac on cattle by farmers, which most of us would recognise it as being used in Voltarol gel. Due to religious reasons, the majority of the people who farm and own cows on the Indian subcontinent do not eat them at the end of their useful lifetime, or sell them for beef. In fact, in Nepal you can be heavily fined or imprisoned for being in possession of beef illegally and so, as your cow approaches the end of it’s useful life it makes sense that you would give it a shot of anti inflammatory to keep it going a little longer. When the cow does die, as has been the tradition for a long time, the carcass is left out in order for nature to dispose of it. With large concentrations of diclofenac still in the cow’s system when it dies, this is passed into the vulture’s systems and causes liver failure and death.

The vulture species found in Nepal.

For most people the delicate balance that has been disrupted is not immediately apparent, but it is causing massive problems with an almost “butterfly effect” chain of reactions. Vultures are nature’s bin men, sorting out the rotting flesh that otherwise can lead to a whole host of problems. I have had the privelege of working with vultures and am more than happy to preach for hours about how fantastical they really are. For the most part, cattle carcasses that are left to the elements were traditionally eaten by vultures. They have an amazing digestive system that can neutralise some pretty deadly bacteria; botulism, anthrax and cholera to name but a few. By removing them as an important part of the food chain, the spread of disease rapidly becomes a problem not least because of the now rapidy increasing numbers of feral dogs. Their population has exploded exponentially in India, filling in the gap where vultures previously did the clean up job. Unfortunately, their digestive systems do not neutralise the diseases mentioned previously and even worse, this is leading to an increase of rabies and other diseases recorded in India. Approximately 60% of the world’s cases of rabies occurred in India and between 1993 and 2006, this had massive implications for the healthcare system and it is estimated that the decline in vulture populations has led directly to an estimated additional $36 billion being spent on health care. If all of this isn’t enough reason to turn our efforts to conserve these amazing birds, it is causing massive probems for religious groups that traditionally would use ‘sky burials’. The most well known amongst these would be those of the Parsi religion, but it is also known amongst the Buddhist communities on the Tibetan Plateau. It is forbidden to be cremated or interred and so the people of these religions are now facing a dilemna as to how to dispose of their dead safely.

Birds are hard to take photos of!

Fortunately, Nepal is working hard to try and turn the tables in vultures’ favour, particularly with the setting up of ‘Vulture Restaurants’. Vulture Rescue have now set up a number of centres throughout Nepal where the NGO will purchase elderly cows off farmers at a fair price. The cows will then live out the remainder of their lives drug free at a retirement home (Yeah, even cows need rehab). Once they’ve died, the carcass is left out for the vultures to consume it. It works pretty well and aims to make the process beneficial for the whole community. The farmers obviously are happy to get a fair price for their cattle and also don’t have to dispose of the carcass once it dies, the local community benefits from the presence of tourists who can pay a small fee to watch a carcass being stripped and the vultures benefit with the presence of a safe food source. It’s a win-win situation and people are beginning to realise the importance of these birds that have, for so long, had a bad reputation (I blame the Jungle Book). As we cycled through Nepal, we would sometimes see dozens of vultures circling in thermals and it was a beautiful sight to behold. Hopefully their numbers will continue to increase until they are a regular site again. If you want to find out a bit more about Vulture Conservation in Nepal, you can have a little read here 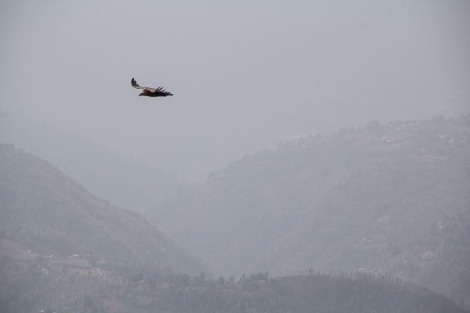 Egyptian vulture at the Pokhara Parahawking.