Namaste! Such a simple word and so important at the same time.We are greeted every day in Nepal by dozens upon dozens of people, from tiny toddlers to old ladies hauling back breaking loads, with massive smiles in this way. The problem is, to do it properly, you really should put your hands together and bow your head slightly. When you’re carrying a big load, or cycling, or otherwise occupied, a one handed gesture is considered acceptable. Head actions aren’t a problem when we’re cycling, and for the most part, now that I’ve apprently achieved some semblance of balance, neither are hand signals. However, when we started on the 13km rough, bumpy androcky track to Bardia National Park, the incidents of “Namaste!” Shouting seemed to triple! It made for along ride; cycling through an almost dry river bed and numerous small villages, but one that was ultimately worth it.

When we decided to go to Bardia National Park, we really didn’t know much about it, except for the fact that it was down a long unpaved road just off the route we planned to cycle towards Pokhara. With National Park entry fees having been pretty much extorionate in most of the places we’ve been so far, we were hoping maybe we’d get to do some acivities when we got there. Having emailed in advance and gotten a lightning quick reply, we made our way to Mr. B’s Place, a small guesthouse located 50m from the entrance to the National Park. They had offered to allow us camp for free, but on arriving and realising that the rooms were comfy and good value at 500 rupees a night, we decided to settle for comfort instead! Bardia was given status as a National park in 1988, having formerly been established as royal hunting reserve. The numbers of large mammals fluctuate due to migration to and from India or other National Parks, sometimes they ship misplaced animals in, but by far the biggest factor negatively impacting numbers is poaching. The Chinese are still busy snapping up those rhino horns to make medicine. Apparently it can cure a wide range of ailments from fever (buy some aspirin) to hallucinations (stop eating the funny mushrooms) to devil possession (go see a trained professional). In summary, for every ailment a rhino horn will supposedly cure, there are at least 100 other, less shit ways to fix what ails you. Despite the problems facing wildlife numbers in the park, it is still a great place to go to see elephants, one-horned rhinos, boas, deer, wild boar,leopards, gangetic dolphins, crocodiles, tigers and any number of birds you might care to mention.

To the National Park!

Riding elephants over the river!

And so, with a close eye on the purse strings, we set ourselves the task of deciding which activity would give us the most enjoyment and the most chance of spotting animals. Our final decision was swayed by the fact that two of the other guests at Mr. B’s Place had already booked to raft down the Karnali River, through the National Park and on to the Girewa River. Ray and Martin had arrived a day after us and spent most of their time looking for tigers in earnest; under the bed, behind the curtains, the length and breadth of the National Park, not a one was to be seen. Despite the fact that we were convinced they might have some bad tiger juju following them around, we asked them shyly if they would mind two scruffy cyclists joining their first rate rafting trip.

They were up for it and so we set off from our accommodation bright and early to head to Chisapani to launch our craft onto the great Karnali that begins life somewhere in China and finishes up by joining the Ganges in India. Our departure was somewhat hampered by one of our trusty guides somehow forgetting the pump for the inflatable raft and we waited impatiently amusing ourselves by drinking chiya and grabbing by-passing goats minding their own business. When we got on the river, we zipped along the first section at quite a lick. Once we entered the park, we kept our eyes peeled, paddling towards the bank to investigate when I spotted a boa. Despite the bank being pretty much covered in tiger prints (it looked like there had been some sort of tiger festival there earlier), the big cats remained elusive all day and we meandered down the river spotting deer and langurs. We were rewarded at the end with the sighting of a mother rhino and her baby entering the river to blow bubbles and cool off. The second biggest event of the day, aside from rhino spotting, was one of our guides dropping his phone into the river and immediately diving in after it fully clothed, looking somewhat disappointed when it failed to work after he fished it off the bottom. 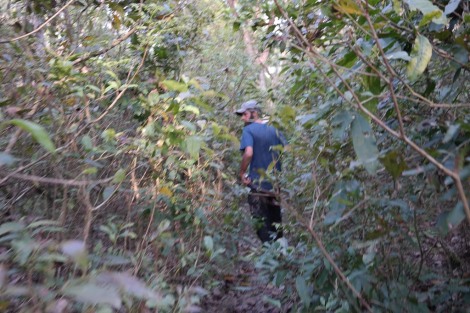 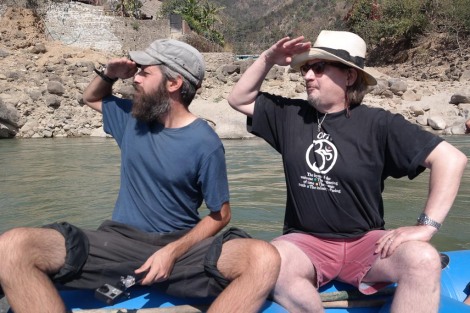 Two rhinos… one having a wee.

We spent a week in Bardia with our kind hosts. Every evening Mr & Mrs B would pop over to our mud hut to see what we were cooking and what we were planning to do the next day. We visited the crocodile breeding centre where there didn’t seem to be much breeding going on but plenty of unlocked doors so that, should the mood take you, you can spend an hour or two cradled in the jaws of a mahoosive mugger crocodile. We also visited Vikram, a blind rhino who was brought to Bardia from Chitwan Natinal Park as a calf. He had originally roamed free in the park and was a favourite with rangers and visitors until he trampled a local Hindu priest. He is now kept in captivity for everyone’s safety but seemed quite happy wallowing in mud and chomping down on rice treats given to him by his keepers. The hot afternoons also proved a perfect time to go down to the river for a dip by the Elephant shed before watching the work elephants come back form the jungle after a bit of exercise. 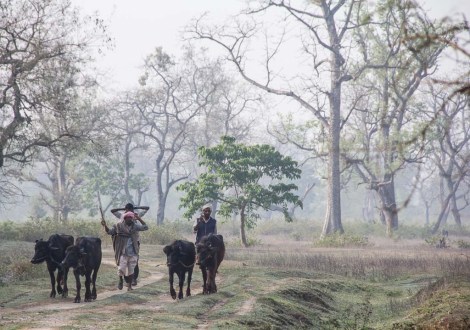 We also availed of one of Mr B’s bird watching walks, a wander through the community forest revealing woodpeckers, bee-eaters, purple sunbirds and some vultures floating overhead as well as a crested serpent eagle waiting patiently in a tree at our lodge when we returned. When we left Mr B’s and Bardia after a week long sojourn, it was with the feeling that we will hopefully be back someday. We won’t be visiting the more popular Chitwan National Park, it could never compare to the tranquility of beautiful Bardia and I think that looking back over our time on the road in the last 8 months, we would be hard pressed to think of accommodation where we were more welcomed and better looked after than by Mr B and family.

One response to “Bardia National Park”