Nobody knows how to be quiet here, and they don’t seem to understand why you would want them to be. At 6 o’ clock this morning for some completely unknown reason, someone released a whole coachload, in fact a rabble, of young school boys in our 6 room guesthouse. They ran amok, screaming and shouting, tried to open everyone’s door and were generally pretty annoying. Their teacher didn’t seem to understand why I might have a problem with them screaming blue murder at stupid o’ clock in the morning, but nonetheless, it got us up and getting ready for the day. Grumpiness set aside, we sipped our coffee as we watched Ooty go about it’s morning business. This mostly involves horses seemingly going for a stroll down the footpath by themselves, cows foraging in skips and lots of head wobbling over steaming, sweet cups of chai.

They have one ingredient right….

Our route today is a zinger, we’re heading from over 2000m down to about 800m through national park, along the steepest road in India. We set off with a hope in our hearts that our brakes wouldn’t overheat and that we might even get to see some of those elusive wild elephants. What’s more, after making a few phone calls yesterday to the Forest Department, we found out that there are rooms available in the National Park accommodation within the Tiger Reserve and so we decided to head to Thepakkadu to stay there. The possibility of seeing tigers fom a safe distance was an exciting prospect, magnified by the prospect of being able to chill out on a porch in the middle of nowhere as the sun goes down. 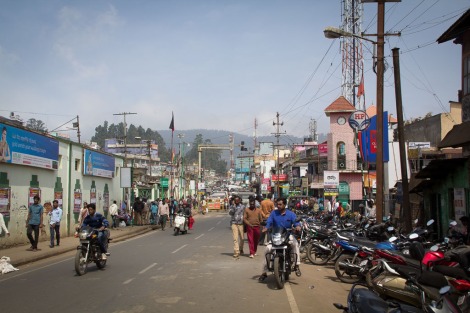 The cycle out of Ooty was just as dusty and busy as expected, but once we had pedalled about 5km out, the traffic and the constant string of houses and shops thinned out considerably. We suddenly found ourselves perched overlooking a massive valley with the road wiggling and winding far below us. A sign announced that we were at hairpin bend No. 1 of 36!! Oh and also that we should drive on the left hand side, there were 15 accidents on this road last year and finally that, should it be needed, there was a free ambulance available! We began our steep descent, I often felt that if I went too fast I would go head over heels and end up at the bottom of the hill. The good drivers of India took this opportunity to show off their complete inability to adhere to their own side of the road and we quite often found ourselves approaching a corner only to have someone come up the hill, round a corner on the wrong side of the road and then stare at us as if we were rock n roll loving aliens beamed from outer space! The road signs got more and more outlandish; “save the planet”, “don’t fear the darkness, light a candle”, “live to enjoy the memory don’t drink and drive”, “speed thrills and kills” and our personal, hands down favourite “free mortuary pick up available”. Great, thanks for that, I’ll bear it in mind! 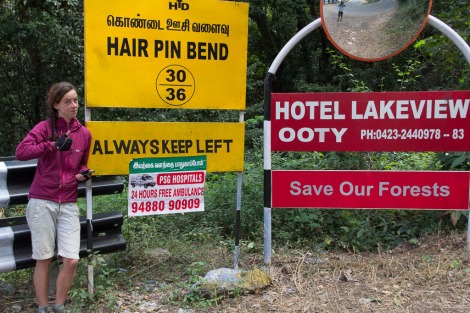 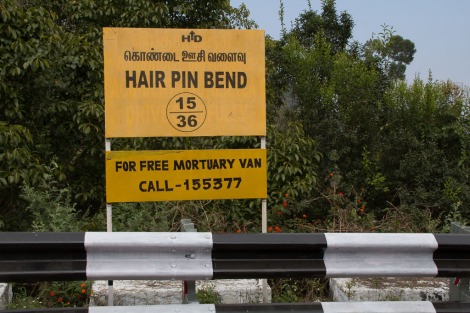 A fairly spanky new road surface and very little traffic lent itself to an enjoyable first few kilometres and we saw hairpin bends 1 through 23 quite quickly, with the odd breather to give our hands a little rest and to let our brakes cool down enough to carry on. And then all at once, the lovely smooth road ran out and every bus within Tamil Nadu decided to take a trip on our road. With a road barely wide enough for one vehicle, we negotiated our way carefully, squeezing past buses, jeeps and cars until we found ourselves at the bottom of the hill and onto the rolling plains. Again, the traffic disappeared and we cycled up and down empty hills with many a sign for wildlife crossing. You never feel quite so alone cycling as you do when you think there’s a chance you might get trampled by a great big nelly because it thinks you’re a coconut! Every twitch and shuffle in the dense thorn bushes that encroached to the side of the road had me craning my neck to see what the culprit was. I really want to see a wild elephant but I definitely draw the line at having to pedal away from one at high speed in a thirty degree sweltering midday sun!

Clear instructions on what to do… 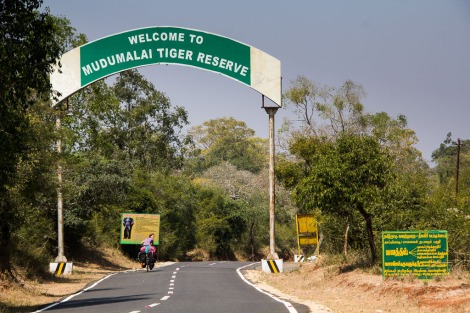 We made it back to inhabited areas after a few kilometres and passed through two small villages before reaching the border for what is known as the core area of Mudumalai Tiger Reserve. The stern, mustachioed men at the barrier told us that we couldn’t cycle through. This is despite the fact that hundreds upon hundreds of cars and jeeps pass through here every day. We weren’t allowed to cycle the final 5km to Thepakkadu due to the apparently high chances of being squashed or dealt a terrific mauling on the way. We argued and pleaded and tried to convince them to let us past their great big bamboo barrier but they were having none of us. We relented and loaded our bikes into a jeep and bags on the roof and zipped through the “core area” where the most theatening thing we saw were a few deer grazing a few metres away from the road. It was fun though and we weren’t too bothered that we couldn’t cycle the last part, especially when we arrived at the cross roads and saw the Forest Department accommodation. A small semi circular building with simple, clean rooms, overlooking a river with not much else going on except for a beautiful view and some much wanted peace and quiet. When we enquired about our room, we were told to go back to the Information Centre, and so I pedalled up quick smart, where a lady with all the personality of a freshly dumped elephant shite told me that we had no reservation, there were no rooms available and she didn’t give a flying continental fuck. Maybe not so much in those words, I’m paraphrasing. And so we argued and pointed out that we had nowhere to sleep and that the only reason we had come here was because we had been told there were rooms available. 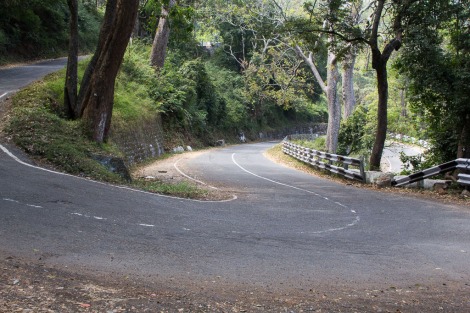 As we sat pondering what to do, another tourist arrived up, the exact same had happened to him. What a great system they have! We were now stranded in a National Park with no accommodation available and our only choices were to try to head further towards the next town which was 30km away or head back to the edge of the core zone, forking out for a jeep yet again, and find somewhere to sleep in Masagudai, 5km away. As the afternoon was wearing on, we decided to head back, we’ll have to figure out how to cross the Tiger Reserve yet again tomorrow but at least we knew there were places to sleep in the nearby village.

Down on the hot, dusty plains.

So back through the park we hurtled, bicycles and baggage all lumped into a jeep. When we found somewhere to stay, it won above the other choices as it had a shower instead of just a tap to wash under, but it turns out the shower head is just there for the craic and doesn’t actually work! It would seem that you can’t win them all, but at least we have somewhere to lay our heads. When we headed out for supplies and a cup of tea earlier this evening, we stepped into a small restaurant and enquired about the price of a cuppa. The owner seemed a little pushy and it was a bit overpriced but we ordered two teas anyways, in desperate need of a sit down and a drink. When we went to pay though, after some very confusing convesrsation with the young guy on the till, the owner had already paid for us. Which just goes to show you how a day in India can go…… beautiful scenery, crazy taffic, reservations that aren’t honoured and the surprise of a cup of tea when you need a little boost! No two days are the same; it’s joyful, it’s excruciatingly annoying, it’s surprising, but one thing’s for certain, it’s definitely not boring! 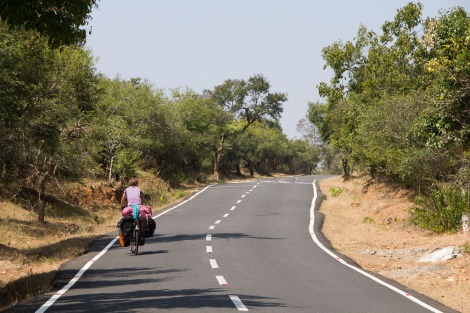 Quite scary with the thick vegetation blocking your view! 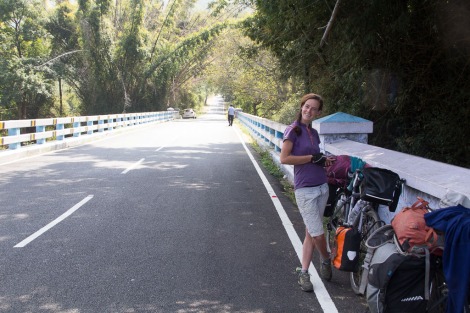 One response to “In India, Yes means No. Don’t believe everything you hear!”