I bought a cat eye cycle computer before we left Europe as the one I left home with failed within the first week of leaving. One of the features the new one has is the amount of CO2 we have ‘saved’ through cycling and not driving which is quite interesting, I have often wondered whether our trip has been CO2 neutral or not. Cycling is regularly quoted as being one of the most environmentally friendly ways of travel, but has our effort at crossing continents by bicycle (but taking occasional flights) resulted in a net positive or negative in CO2 emissions?

Using a series of simple ‘back of a chapatti packet’ calculations we thought it would be interesting to see if our journey so far has been carbon neutral or not. Clearly there are a number of (major) assumptions, estimations, simplifications and omissions here, but hopefully some basic calculations will assist in creating some kind of overall picture.

What would have been better…. bicycle or car?

How far have we cycled?

This should be the easy part, but it isn’t! Sheena has had a cycle computer on her bike since we were on the southern coasts of Croatia, prior to this we only have an estimation of how far we have cycled as mine broke in two days! If we take the lowest possible estimate (Google map directions which do not include any of our deviations, getting lost, looking for food etc) for this distance then a fortnight ago we passed the 10,000km mark (we believe it is closer to 11,000 but for now we will call it 10,000km). 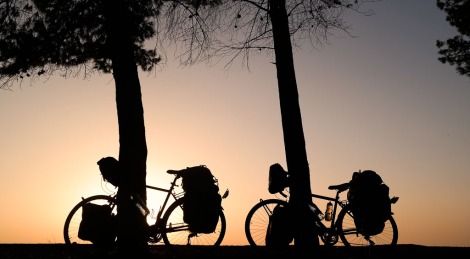 How much CO2 have we saved by not driving?

Using the emission average of 150g per km driven for a midsized hatchback car our cycle has resulted in a direct saving of 1.5 tonnes of CO2 (Japanese Ministry of Transport, 2008). The problem with this is that is it unlikely that a ford focus or VW golf would have made it along the roads we have ridden!

It is likely that to have attempted this journey by car we would have used a 4×4. Without the budget for a fancy Land Rover Defender we would probably have gone down the same route as our friend JP who is currently driving around the four corners of Europe in an old Toyota Land cruiser. Emissions for a new TLC are 213g per km, to account for the fact we would have bought an old one we will round this up to 250g/km. 250g/km is a conservative estimate that only considers fuel consumption and not maintenance, production, fuel type etc etc.

Basic car vs bike comparison: This leaves us with a 2.5 tonne CO2 saving over our journey! 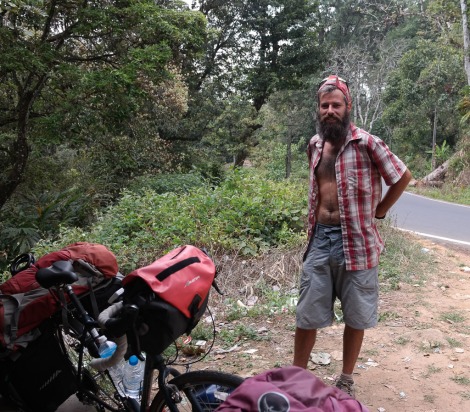 Its paying off Sheena, we are saving the planet!

BUT (a big but): we have some CO2 costs to take into account:

Because this is about our journey and not just our existence, we will only take into account our transport and not the everyday consumption we assume would be similar here or at home. Our fuel is food and food production results in CO2 emissions. It could be argued that by cycling we are consuming more (I’m not sure if we are as we were eat a lot at home as well)… this may be the case, but most of our food now consists of locally sourced vegetables so we believe that any change from increased consumption is balanced out by shorter supply chains and less meat eaten. We are not taking into account the other equipment we have, as the vast majority of it we already owned and had used considerably before the trip started.

Looks filling, but it was filled with air.

Our bikes were new and are our main method of travel so we will try to include any CO2 cost they may have contributed. Initially we were unable to find a figure for the amount of CO2 emitted to manufacture our bikes (or any bike). Although no way near as complex as a car, they do contain components made from various materials – metals, rubber and plastics. To simplify this we will assume that all of Sheena’s bike is made of one material (aluminium) and all of Sam’s bike is made of one material (steel). Both bikes weight approximately 15kg.

Sam’s Bike: The production of a kilo of steel through a blast furnace converter is estimated to emit 2kg of CO2 eq (equivalent) materials. 15kg x 2 = 30kg.

Sheena’s bike: Aluminum is considerably more energy intensive to produce than steel. The source of the fuel used to generate the electricity (coal, gas or nuclear) and the method used to create the aluminum (Al-electrolysis, Thermal C or Thermal CO) result in considerable variations in emissions. The worst case scenario using electricity from coal with the Al-electrolysis method would result in 16.3kg of CO2 eq per 1kg of Al produced (this drops considerably if gas or nuclear power are used 8kg/2kg CO2 eq per kg). As our bikes were made in Taiwan it is likely the Al originated in either China or Australia, both countries where coal is king. Sheena’s bike: 16.3 x 15 = 244.5kg! Ouch!

Mmm… there is a considerable difference here! Sheena’s bike is not all aluminium, only the frame (total weight is actually 12kg, unsure of the frame weight). Also this hasn’t taken into account the transport required to move the bikes to the UK.

For a more complete cost only two studies could be found:

An MIT study that suggests 240kg of CO2 is emitted during the manufacture of a bike and its transport to the US. An investigation by Grist suggests 0.9 tonnes of CO2 equivalent per $1000 of production cost. We do not know the production cost value of our bike, but by taking the MIT value and using the Grist values would give a production cost of ~$250 dollars which seems a bit high for a bike that cost £450 retail in the UK

After working in an outdoor retailer for a while it was evident that the VAT and retailer profit accounted for approximately 50% of the sale price. This would mean the manufacturing cost plus manufacturers profit, Dawes profit and import duties would be ~ £225. (The retailer was a cycle shop in Yorkshire, the ‘Manufacturer’ was Dawes who would contract the actual manufacturing to one of the Taiwanese bike assemblers). From this we could estimate that the production value of the bike would be ~ £100. £100 = $155. This estimate would lead to our bikes contributing 139kg CO2 each.

From this (and it fits nicely between our estimated raw material emissions) we will say our bike manufacture and transport to market was responsible for 150kg of CO2.

(What does CO2 equivalent mean? Not all emitted materials are CO2, other gases are given off during production such as SO2 and CH4 that also have a Global Warming Potential (GWP). These have been incorporated and converted into CO2 equivalent to account for the total impact). 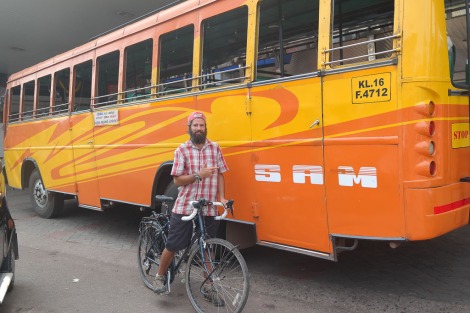 A one way journey on a channel crossing is estimated to emit 5kg of CO2 per passenger. (http://www.theguardian.com/travel/2007/aug/04/saturday.green1)

Ok, this is where its gets interesting (if this sort of thing interests you…)!

We have taken three flights in total: One from Serbia to Sri Lanka that had a technical stop at Ankara and a plane change in Doha. The other was from Sri Lanka to India. This leaves us with:

These figures are taken from the International Civil Aviation Organisations carbon emissions calculator that considers aircraft type, fuel variety, passenger and freight loads to calculate fuel consumption. It calculates CO2 emissions per flight by using the constant 3.157 tonnes of CO2 per ton of fuel burnt. It does not consider any other factors such as aircraft manufacture, extraction and processing of fuel or general operations required at airports. Average loads are calculated from airline data.

So, with those values we have the following results, a net saving of 1042kg of CO2 – just over one tonne! Oh yes, our journey by bicycle has not contributed more CO2 than the same journey by car! 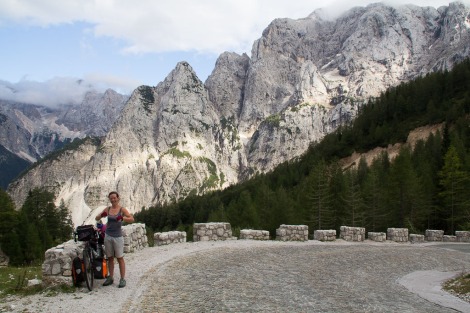 However…. There is one problem with this:

Importantly our flight calculation does not take into consideration ‘radiative forcing’ ie the additional climate impacts burning aviation fuel has high in the atmosphere. The effects of NOx emissions on atmospheric ozone and methane, water vapour, particle emission and formation of clouds/contrails are not well understood but are thought to have greater climate impact than emissions at ground level.

As a result a number of ‘radiative forcing’ factors are available that multiply the CO2 emissions to provide a CO2 equivalent, these range from 2.7 (IPCC, 1999) to 1.9 (Sausen et al 2005). The IPCC value is based on old aircraft data (they may have a more up to date value, but our internet is very slow here and I can’t find one. There may also be better values quoted in more up to date research but because of the shitty way papers are stashed away behind PAYWALLS I am not able to find out) so a value of 2 will be used.

Argghhhhh, so that means even though we have cycled 10,000km and not used a car this has been cancelled out by ONE long haul (Belgrade to Colombo) and one short haul (Colombo to Trivandrum) flight.

In order to cancel this out we still have to cycle 424km to cover the 106kg CO2! 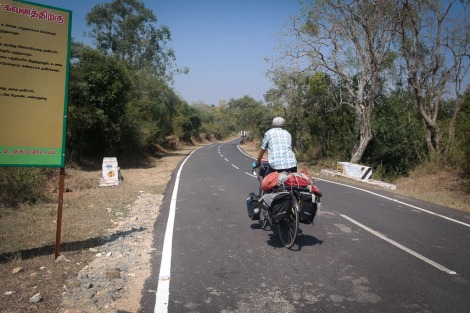 We best get pedaling!

Of course if we add the estimated 16 tonnes of CO2 emitted for the production of a Toyota Landcrusier then we have nothing to worry about… but that would be cheating!

A more complicated calculation would be to try and work out whether our current lifestyle has less or more of an environmental impact than if we were living and working in the UK. I would assume that it has less of an impact, with a tent as our home for a large part of our journey, our reliance on natural water sources, a much reduced electricity demand and lack of car should have a large reduction in our environmental footprint. We just have to stay away from aeroplanes! We knew flying had a negative environmental impact but had no idea it would take more than 10,000km of cycling to offset it!

(This is only a lighthearted attempt to estimate our CO2 balance while waiting for a patch of rain and stomach problems to clear up. We are aware it is not particularly scientific!)

If only we didn’t have to fly…

4 responses to “Cycle touring and carbon dioxide emissions: Are we helping or contributing?”