Part iii of cycling the escape road, Munnar to Kodaikanal

Waking up this morning was especially pleasurable after noting our insides had not been removed with tiger claws. We packed rapidly, loaded up our rucksacks and started to hike into the thick forest to try and find the remains of the track we had lost yesterday.

With points marked on our GPS we walked upslope towards the point we thought our missing trail should join the main trail (which we could clearly see on Google earth) at the top of the hill. It should have been no further than 2km and 300 meters uphill but the terrain was tough, either thick vegetation or craggy cliffs that required scrambling over. We were having serious doubts about whether a) we would find where we needed to go, and b) if we did would we be able to get our gear up here. It was at about this point that we both started having doubts on whether it would be best if we headed back: a lack of food, water and another potential night in tiger country meant that we didn’t want to spend another night up in the national park and perhaps should go back to where we know. We work together and make decisions together; it wasn’t an option to continue if Sheena didn’t want to. I suggested that I head to the top of the hill to try and find what we were looking for, according to our map and GPS we should have been very close, just a Roseberry Topping away!

Topping out over a really nasty steep slope covered in thick bracken and thorns we found it! A perfect green lane old jeep track following the ridgeline that formed the top of the hill we were on! The views on either side of the ridge were beautiful and once up here the going would be much easier! Hell, it even looked like we might be able to cycle along parts of it! This lifted our spirits considerably, now we just had to follow this good trail back to where our trail was supposed to join it, then we could follow our trail back towards where our gear was and hopefully find out a route through the section that seemed to have completely disappeared! (I’m not sure if this makes sense… yesterday we came to a dead end where the trail we were on just ended. We knew that the trail we were supposed to be on (had we not gone wrong yesterday) was on the ridge above us (the ridge road), we also knew that our disappeared route should continue up the hill and join the ridge road. We could see this junction on Google earth with a section of trail that should lead to where we had lost the trail with our bikes. By hiking up to the ridge road we could walk along to the junction visible on Google earth then follow the upper part of our trail back to the area where it seemed to disappear).

The going was very tough

We quickly found the junction and followed our old road… we could walk comfortable along this and followed it all the way almost to our bikes. It seems that a huge landslide plus years of forest growth had wiped out a few of the switchback turns rendering the section we had reached yesterday being impassible. By following the ‘good’ section of the road back towards our bikes we essentially had a point now on the map we had to reach where we knew the going was possible. It turned out it wasn’t too far from where our bikes were… we just had to get them up 200 meters of height and about 500 meters of distance. The only problem was the ground was very steep and the vegetation was dense in parts – it was still early, if we can spend the morning battling through this then we would be left with the afternoon to follow the jeep trail and cover the 20km or so out of the national park! 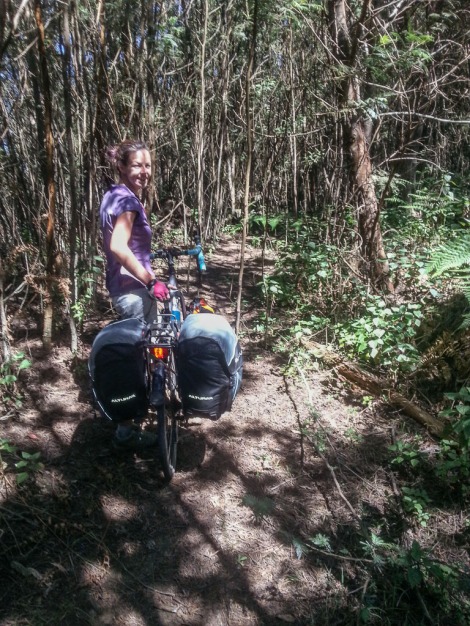 Once out of the forest we could trace its route 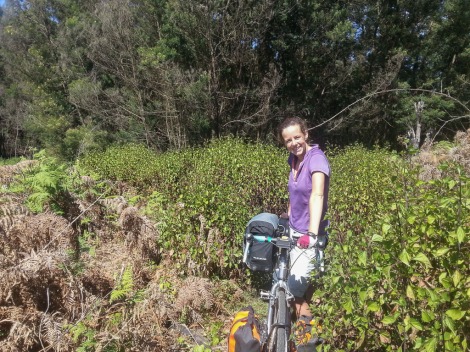 It was physically exhausting once again but we reached the remains of the old road. By 11ish we had carried our bikes and gear up in separate loads. It required walking the front panniers, back panniers, and bikes one at a time in sections of 50 meters so we didn’t loose them in the thick vegetation (it was easy to become disorientated!). At the road we could continue by pushing our bikes (occasionally unloading to cross trees) to the junction and then up onto the ridge, by 12 we were at the ridge where we stopped and had a basic lunch at the top (noodles again) before enjoying the better quality route that continued. 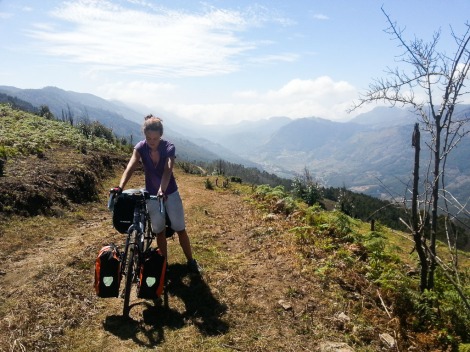 Finally up on the ridge!

The route continued to be very tough but eventually we descended to a valley where we could see sprawled out agricultural land, we made it out of the park and into areas of cultivation where we started to pass farmers living in basic traditional houses. We still had 6km along a very difficult track that went to the bottom of the valley and back up the other side, people packing out their produce with mules explained that we would join a better path in 5km so we continued through the pain hoping for better times! 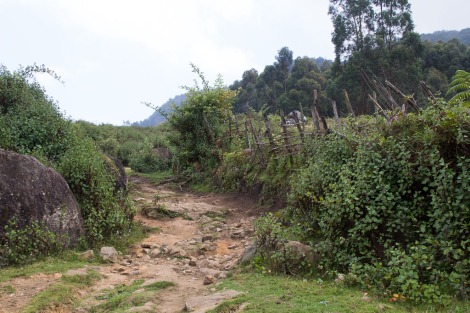 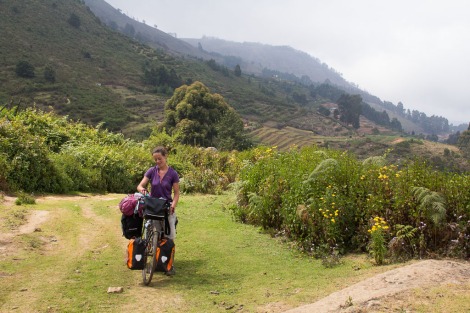 On our final approach to what was supposed to be a metalled road we started to pass more people. A woman with half a tonne of logs on her head asked Sheena where we had just come from, after saying Munnar she grabbed Sheena’s arms while saying a combination of bravo and you must be so strong! Coming from a woman walking up a hill with logs on her head this was quite the compliment! 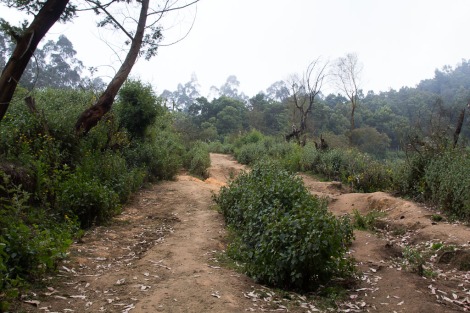 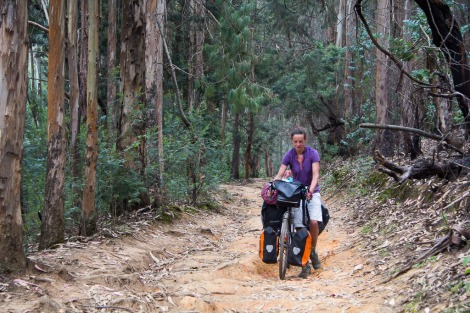 Our hearts sunk when we made it to the ‘main road’, we had expected it to be good quality but it was rough gravel with many potholes and very hilly. We had hoped to cover the last 45km into Kodaikanal easily but we managed little of this and had to find somewhere to camp after our exhausting morning. Even worse was the lack of anywhere to buy food. Even finding water was an issue. We found a well in the grounds of a school which we used (and filtered as it was filthy water) and briefly fell out about the lack of places to camp, again we had reached the point of physical exhaustion and couldn’t find a suitable spot. We couldn’t make it up the next hill (all we had eaten was half a block of noodles and jam by the spoonful) and sat by the side of a small hill – everything we had passed was being cultivated or in clear view of the road. Fortunately we walked up a small mound and found a perfect spot on the hillside below, far enough away from the surrounding farms to be hidden when the sun went down. We had another meal of lentils before sleeping well once again. 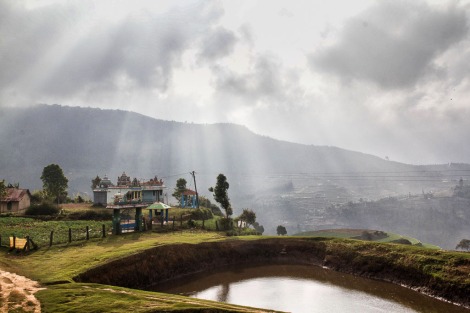 One response to “Bushwhacking with a bike”