Knowing we had another long day we woke early, the alarm call had been changed to promote a more rapid rise but the familiar process of looking out the window to see heavy rain meant we had little enthusiasm for movement. We packed our things, loaded our bikes and walked a short distance to fill ourselves with the same thing we ate for dinner… daal and parotas with a mug of sweat tea.

Even the cows were miserable

We set off into the torrential rain hoping it would calm down or stop soon as it has done some days, but it persisted and was to be with us all day. Sometimes light, sometimes very heavy, we took short breaks under the awnings of abandoned buildings when it was really bad. Our route had us crossing what was sometimes called the Tigerlands, the former heartland of the LTTE. Due to its almost total destruction during the closing year of the war there is little left here, again the remainders of once vibrant villages show through the undergrowth every now and then. Now it’s a land of sporadic temporary housing, faded NGO signs with their myriad of ridiculous acronyms and occasional speeding white Toyota landcrusier. Life here is clearly harder than it is elsewhere in the country, much of the land is affected by the blight of landmines and UXO and the military presence is high. It is visibly poorer but this didn’t stop everyone from being extremely friendly and welcoming towards us. We were not passing through because of curiosity but because we were left with little choice after we found out we couldn’t take our bikes on the train from the north. The only other options were to take the same west coast road south or the main highway through the middle of the country. Instead we opted of the east coast knowing that we would pass a large bird sanctuary and the potential to finally see some of the much elusive elephants we keep hearing are so common in Sri Lanka. We knew we would have to pass through the area of the final brutal battles but we didn’t know what to expect. This was also the core area our MOD clearance permit was for, the Sri Lankan government has a keen interest in not letting certain people here for reasons which will be elaborated. 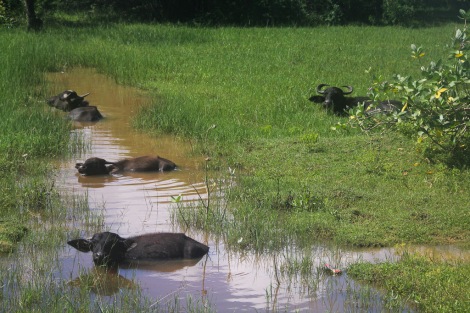 Our cycle through the day was difficult, the rain continued to lash down and we saw no elephants or even any interesting wildlife. We had a few short eats (or shorties) to have on the way, the name given to the variety of fried snacks you get here; samosas, dosas, spring roll type things and spicy doughnuts – greasy and normally wrapped in the torn pages of a textbook or legal document. Hot sweat tea kept our spirits up as we cycled with our heads down while water poured off us, our feet and hands pale and wrinkly from being saturated for so long.

Turning a corner we passed a sign proclaiming a war museum and a large collection of war type material spread out in a fenced off area by a large lake. We were directed where to park our bikes, in a large gravel area that required us to pass through an almost knee-deep torrent of water. The ‘museum’ had been set up by the army and was really just a place where they had put some of the LTTE material they had found to showcase to visiting Sinhalese people from other areas of Sri Lanka. It was a motely collection that showed considerable gruesome ingenuity with improvised submarines, boats, artillery, aircraft and small arms. It was free to enter and was more of a post war showcase than museum, a bamboo hut contained landmines, guns, IEDs and other guerilla type weapons. We were the only people there other than the bored army personnel sat at the gates in and at the hut with the guns. We spent a bit of time walking through the ankle deep water in the pouring rain before continuing. 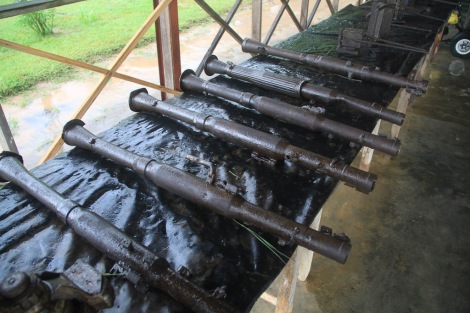 As we came closer to Mullaitivu we passed through a scared landscape, the waterlogged sandy soil was clearly pockmarked with craters from bombs and artillery, vast amounts of tattered and torn clothing remain clung to the base of vegetation, a sad reminder of what happened here five years ago. The whole area to the right of the road we cycled along was marked off as a minefield, clothes and possessions everywhere. With the forested barbed wire perimeter of a navy camp to the left, the narrow but long stretch of land to our right was marked off for about 5km as an area with mines. Mullaitivu was the site of the final battle in the war, the LTTE were hemmed in to a narrow isthmus of land with a large lagoon on one side and the ocean on the other. Almost idyllic in its visual beauty, the final few months were ruthless and are still causing big problems for Sri Lanka now. After almost 30 years of civil war the Sri Lankan government were clearly keen to finally destroy what had been a continued crippling hindrance to the islands peace and development, and as such they rejected any calls for a final ceasefire and wanted to finish the LTTE for good. Unfortunately, along with the remains of the LTTE were an estimated 300,000 Tamil civilians in this tiny stretch of land. The UN estimated 30-40,000 civilians were killed in the final four months, a number believed to be too low by the US. Safe havens established were continued to be bombed, hospitals were bombed and humanitarian aid was prevented from entering. Persistent and continued allegations of executions, mass rapes and deliberate targeting of civilians has continued to plague Sri Lanka who has refused to let any investigation take place. The LTTE have also been accused of using civilians as a buffer and preventing people escaping or moving. All reporters, NGO and humanitarian workers were removed from the north months before this took place so there were no impartial eyewitnesses to whatever took place. UN workers are still being refused visas, and in some kind of messed up backwards socialist thinking, the president is still regularly quoted as saying there is a western capitalist conspiracy to dominate Sri Lanka, that by spreading lies the war can be started and money can be made. There have been many calls for an investigation, yet no one is allowed into this area in order to speak to those people who experienced whatever horrors took place. The MOD clearance we had to apply for is the latest measure to prevent any kind of investigation from taking place. There was no doubt about it, our actions while here were being watched and we were being followed. We were consistently followed and would always have someone on a mobile phone, either pretending to text or making a call on every street corner we passed down. The same scooters would pass us, and if I make a quick turn down a street then they would be present and waiting for us to make our next move.

Apart from harassment from plain clothed army/police we made it into Mullaitivu without problems and tried to find a place to stay. We were directed to a building where the top two abandoned and half finished floors had been converted/used as a basic hotel, basic barn doors had been used to create rooms to stay. After finding food there wasn’t a huge amount we could do so we cycled around the local area for a short while until it became dark.

We didn’t finish writing about our time here which was a shame… now six weeks later we are just going to post this as we need to catch up! It was an interesting place and left us with many thoughts. 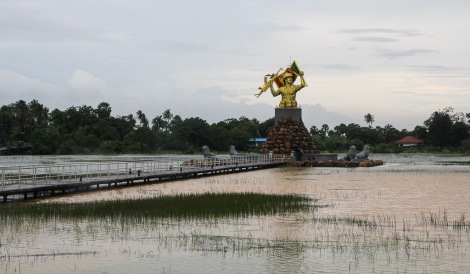 Mmm… are we or the cow on the wrong side of the tape? 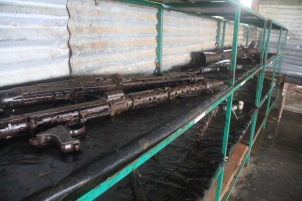 The final causeway to Mullativu 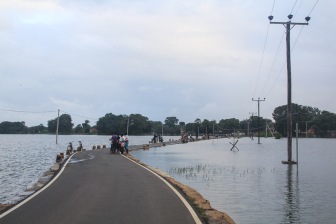