The south east of Albania has been quite a contrast to many of the parts of the country we have seen before, most of the towns and villages we pass through are forgotten backwaters. Once centres of industry and manufacture during Communist times, they have been forgotten in the years since and are shunned by tourists in favour of the Ionian Coast, which has been dubbed Europe’s new Riviera. Even those that pass through on the way to Macedonia usually zip by old soviet buildings, shepherds keeping watch over flocks of sheep and bustling town centres on the way to places better marketed with more investment. For us, however, this has been the most rewarding part of cycling through Albania. When we woke up this morning, gleaming, snowy mountain tops watched over us as we made tea after enduring our first frost under canvas on this trip, waking up and poking our heads out of the tent revealled a shiny white film over anything that had been left out over night. As we hopped from foot to foot sipping our morning brew, the sun rose over the mountains lighting up spectacular scenery all around us. It is, without a shadow of a doubt, one of the most beautiful panoramas we have been witness to.

With a hot drink inside us and our packing up done, we started our days travelling with a slight uphill followed by a winding downhill before we began climbing again. At the bottom, we happened upon a small campsite/restaurant with a trout farm that looked really lovely. The chill in the air made a cup of coffee too enticing to pass up, so we stopped. The coffee was less than hectic and a bit overpriced but it warmed us up before we set off again to tackle another hill. The views of the snow capped mountains distract from the effort required to get us to the top and so the morning flew by. As we descended into another valley, we spotted a striking memorial to some partisans who had attacked a German advance during World War II in 1943. They really know how to do memorials here, they’re never just a statue of someone looking aimless or a boring old plaque. These two guys were poised in battle, one about to lob a hand grenade at the enemy and the other with a rifle at the ready. 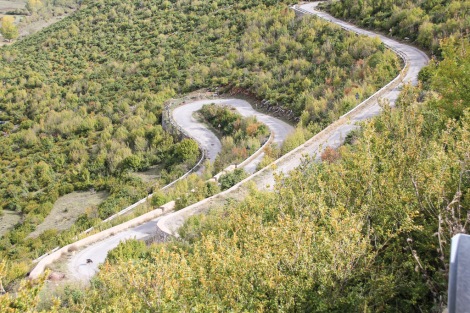 After another climb, we once again descended towards a village. This time, as we did, an ornate graveyard came in to view. We rounded a steep bend to it’s base and Sam mounted the steps to have a closer look. As he did, a car pulled up and a man jumped out. He introduced himself and we chatted for a bit. Pascale is one of the few Albanians I’ve met who not only knows where Ireland is, he’s been there! We discussed the merits of travelling by bike, and when Sam returned, he told us the story of the graveyard. After the partisans that had featured in the previous memorial had fought the Germans in their advance, tehy eventually made it to Greece and had sent back word to other units that the partisans of Borova had attacked them.The following troops decided to seek reprisal for this act where they razed the village of Borova to the ground and massacred 107, women and children in revenge. The youngest of whom was 6 months old, the oldest, 73 years old, all but two of the villagers had been slain. The graveyard had been erected in 1987 in honour of those that had lost their lives. In 2013, the son of an Austrian soldier with the German army who had been involved in the slaughter had returned to the village to apologise for his father’s acts. Pascale was visiting today to place some stones that the Austrian man had brought with him in the graveyard. A truly sobering story and part of the fascinating history of this region of Albania that is not often heard. Travelling by bike often makes us privelege to these insights that would otherwisehave sped past our window as we travelled from one point to another. Before taking leave of our new friend, he told us that we were 5km from Erseke and we would find plenty of eating options there. Good news, as hunger was beginning to bite! 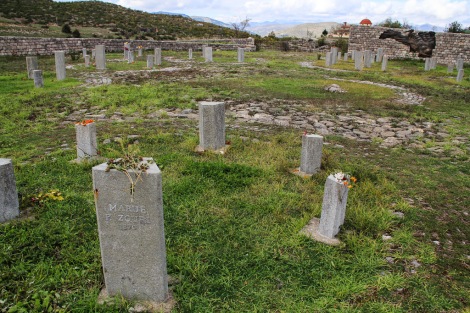 As we entered Erseke, we were surrounded by dozens of old communist apartment blocks and there were many bunkers evident all around us. Erseke lies at the base of the mountains that provide a border between Greece and Albania, and Enver Hoxha would have wanted to make sure no one invaded through his route (or any other one for that matter!) As a result, there are concrete mushrooms liberally sprinkled thoughout this small town. 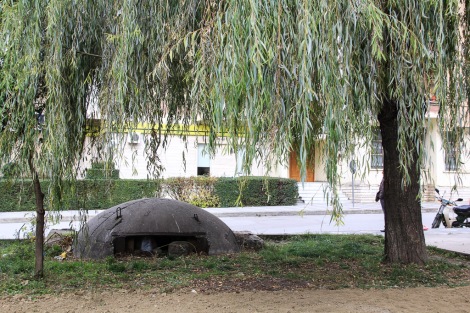 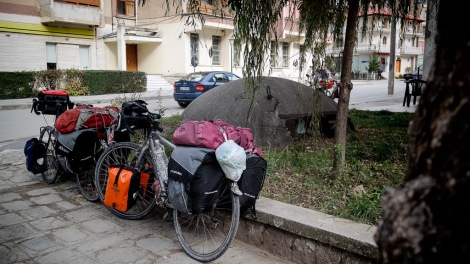 As people milled about, parked badly and sipped coffee, we shared a massive pizza in a cafe by the centre square. Once we had eaten our fill, we headed to the supermarket to fill our bags with supplies for the evening’s camping. This involved Sam trying to mime what an egg is. It’s surprisingly difficult! It finished with him surrounded by women in the supermarket, holding up a chicken and eventually squatting on the floor and pretending to lay an egg. Needless to say they were fairly amused, and it turned out they didn’t have any eggs anyways! The next mini market did and they were proudly on display, removing the need for Sam to whip out his Oscar worthy performance again. It was rapidly approaching 3 o clock at this stage and with the looming sunset hour rapidly approaching and 24km yet to cycle with a steep uphill involved, it was time we got a move on. The uphill was brutal and I almost gave up and decided sleeping in the ditch might be a good option, but some words of encouragement and the off putting notion of starting tomorrow with a leg-cramp inducing uphill crawl was enticement enough to reach the peak. The effort saw us looking over a sweeping valley with a few good camping options. We chose a sheltered spot surrounded by low scrub. It has provided us with plenty of fuel to make a campfire which we quickly gathered before the darkness enfolded us. With our appetites sated, we are sitting by a roaring campfire, warming our chilly backsides before we bed down for the night. We’ve done a hard days work and we will sleep well.