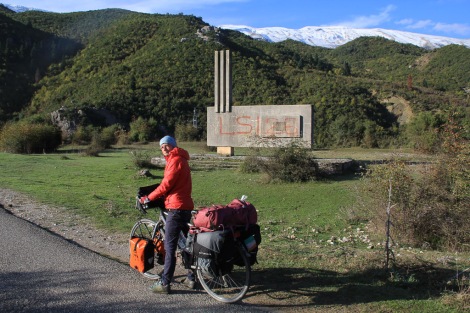 It was seriously cold in the morning!

I’m going to be brutally honest here, Albania has some roads that are quite seriously beyond shite and they nearly got the better of me today. Imagine the surface of the moon, now imagine someone has lobbed a few sticks of dynamite at it, throw in someone dodgy mercedes driving and then you get an idea of what we’ve been dealing with.The crumbling road surface, mahoosive potholes and loose stones can quickly turn a pleasant cycle into a struggle and seriously slows the pace of our progress. We managed 44km today. I eventually had had enough and called a halt to it. It was a tough days cycling with some steep climbs and the early part of the day had seen Sam haunted by the return of the ever-flat tyre. 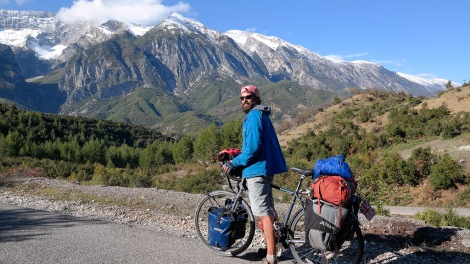 We woke early and chilly and began the day with a visit from the Shepherd who we had met last night. He enquired, using hand signals,if we had slept well and we were warm enough and we took our leave of him to return to the nearby village to have a coffee and pick up a few snacks for the day. Once our caffeine levels were sufficiently restored, we headed off towards Carshove, a village around 20km away and where the 700m climb that was our main aim of the day would begin. We weren’t long on the road before I heard a familiar “For fuck sake” uttered by Sam. His tyre was as flat as the church once insisted the world was, and so the familiar rythm of pumping-cycling-stopping-pumping began. It wasn’t long before intervals between each required pump were non existent and air was escaping from the inner tube as fast as it could be pumped in. There was nothing for it but to stop, carry out a repair and hopefully, once and for all, find the feckin piece of whatever it was that has caused such trouble. At a ramshackle bus stop by the side of the road, we pulled out the surgical kit, basin and water. As I carried out a repair, Sam ran over the tyre with a fine tooth comb, hoping against hope to find the offending piece of detriment that was causing him so much heartache. In a eureka-like moment, he grabbed the Leatherman and carefully prised out a tiny piece of metal wire from the tyre wall. The offending object was no more than 2mm long and had managed to evade us for days. With nothing else evident, we hoped it was a lone ranger and that there was nothing left to cause any more harm so that we could continue on our way uninterrupted. 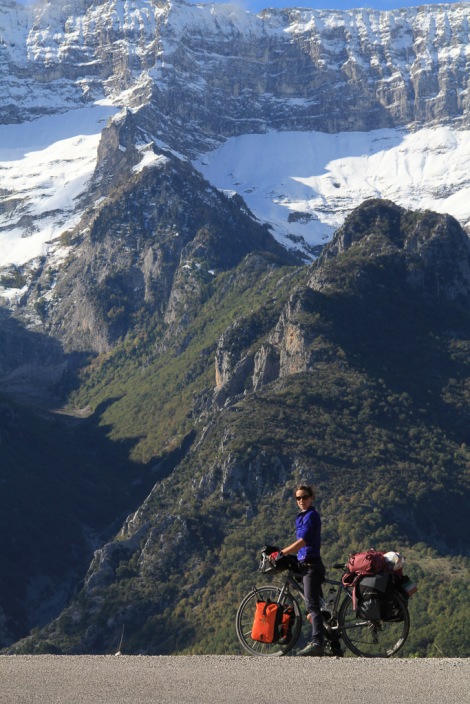 With a huge chunk of our morning dedicated to getting all wheels in working order, it was now approaching lunch time and we entered Carshove, glad to have our problem sorted but growing hunger quickly becoming an issue. The village has a dusty main road (in the loosest sense of the word), leading to Greece. It seemed to have limited food options but we were nonetheless ushured into a shop by a little old lady. Had we needed to stock up on artificial flowers, plungers or candles, it would have been just the spot. As we were hungry, we were presented with two vacuum packed chocolate croissants and a packet of snacks that resembled squashed croutons for what we later found out was twice the going rate. I’m pretty sure that little old lady’s retirement fund is pretty well sorted since she ripped us off, the wagon. Heading into the cafe next door,we were offered extortionately priced coffee with bits floating in it but gracefully declined and left the village to enjoy a lunch of bread, cheese and cucumber fortunately left over from yesterday and our stunning collection of processed foods. 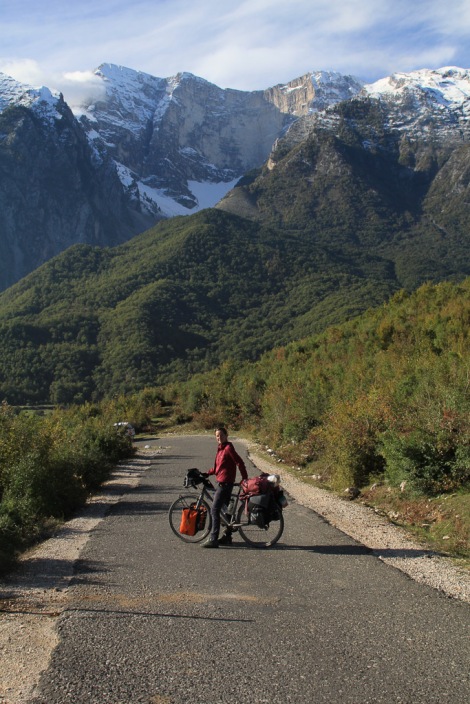 With the edge taken off our hunger, it was time to begin our 700m climb. Roads that started off in a reasonable condition quickly deteriorated and I cursed and muttered profanities with every pothole that I had to avoid. The unfolding view kept us sane, high mountains with snow covered tops towered above and the valley below was lush and green. The climb seemed to take forever but eventually we made it to Leskovic where we hoped we would be able to find a market so we could feed oursleves this evening. As we entered the town, we could see concrete bunkers littered everywhere. Lying so close to Greece, the small towns and villages in this region would have been considered paramount to keep invaders out and so concrete mushrooms, big and small, were constructed with abandon. The town itself is a ramshackle collection of tower blocks and prettier traditional buildings and everyone just seemed to be hanging around. We went in to the first shop we saw where the woman behind the counter visibly lit up upon noticing two foreigners she could rip off. After several minutes of asking her the price of different items, which all seemed to be several times more expensive than they should be, we realised what she was up to and left to try another market around the corner. Here we fared better, and managed to buy everything we needed. Each of the shops we had been to was unlit and we quickly realised that the elecricity was gone in the town. Unsure if this was a permanent or temporary state of affairs, we began to despair of every getting a cup of coffee when suddenly everything started humming to life. A big supermarket opened it’s doors and we were able to stock up on some extra snacks before heading to a cafe for a much needed espresso. 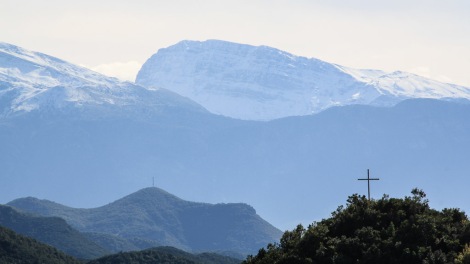 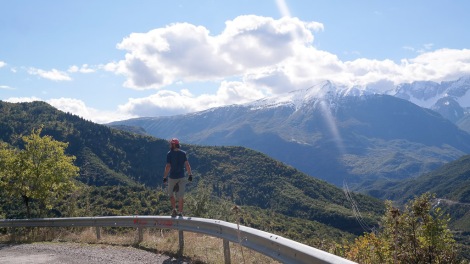 As we hit the road again, the effects of cycling on pretty rough roads for most of the day began to tell. My knees were aching and a sense of humour failure was imminent. Sam sensing the impending tantrum spotted a perfect flat spot just below a forest and we hauled our bikes up a steep slope to set up camp. We gathered mountains of firewood and set up our tent. Our evening has consisted of eating, sipping a few beers and enjoying a roaring campfire. Hopefully the roads improve tomorrow or we’ll never get to Macedonia!! 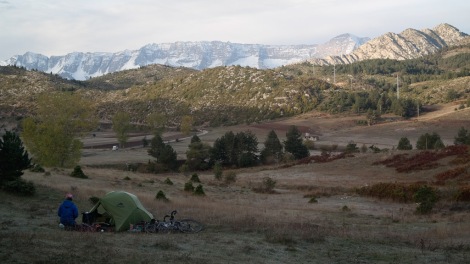 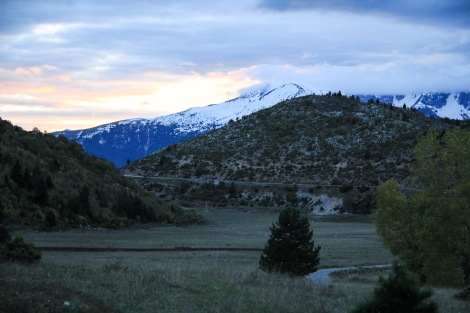