We have often said that cycling is more of a psychological challenge than a physical one, finding the determination to carry on every day, cycling long distances at a slow pace. Well today showed that that is a load of bollocks and we were clearly talking out our arses!

The day started off in the quagmire that was the Lake Bled campsite. The sprawling site looked like it had just been home to the world tractor pulling competition with its acres of churned up mud and grass, a grim place contrasting greatly with the beauty of Lake Bled itself. Leaving a sour taste was the extortionate cost and the bundle of additional charges that they seemed to be incapable of lumping together into one. Our route took us up some very steep hills in order to get to Vintgar gorge, a 100 meter deep 1.6km chasm in the rock created by much higher flows following the last ice age. Beyond impressive, we enjoyed walking along the wooden pathways bolted to the side of the canyon, the fake looking green/blue water surging through the many rapids and rockpools on its way down stream. We had arrived early and had the place to ourselves, able to savour the atmosphere with no one else around all the way to the end of the gorge – a large waterfall. By the time we were walking back along the route the tour buses had started to arrive and tens, if not hundred of bored looking Italians, French and Brazilians were surging through, almost as fast as the water. The atmosphere was completely different and it made us appreciate how lucky we were to arrive early, letting us take our time and marvel in its beauty. 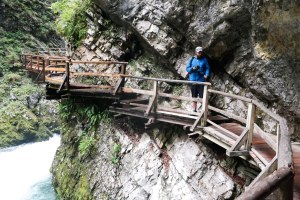 Following this diversion we had the main challenge ahead, the Vrsic Pass, at 1611m the highest mountain pass in Slovenia and by far the toughest part of our trip so far. Initially we slowly gained height along another long beautiful valley before turning off to the West. I had read online one blog that mentioned it was not too bad….. either they were liars, were super human or had nothing on their bikes…

We debated whether to camp at the bottom and attack it the next morning, we had already cycled a fair distance that day and had been going for six days straight. The weather was sunny for the first time in days, and the longer term forecast did not look good so we decided to go for it even though it was almost 3pm. Even if it took us until it was dark, the downhill would be easy and continuous, plus we had enough food to make something should be decide to stop on the way up.

Straight away it was brutal, the steepness made it absolutely hell to get anywhere. The first section and we both almost lost the plot, how the hell were we going to get up here? I thought the first bit was going to be relatively easy until we got to the 26 switchbacks that were to take us up… We were both swearing like made and cursing all the stuff we had in our bags… Initially we thought there was no way we could do it. We stuck with it, slowly but surely making our way up, cheered on by passing cars and motorbikes. Each of the major turns were numbered with an altitude posted on them, and we could see we were making progress, but it was really tough. Adding additional pain was the fact the bends were cobbled, each turn slowing any movement further with the awful unevenness of the surface, especially when the turn was to the right and we were on the steep inside section. We stopped a lot, I contemplated throwing everything I own off the back, but eventually we made it to the top and grabbed the height marker in sheer joy. The road is predominantly used by tourists as a ‘nice drive’ with amazing views, but I absolutely guarantee that no one was as happy to be at the top as we were. Getting to the top in a car is nice, but by reaching the summit through two and a half hours of sheer pain, we had completed our own personal marathon. The satisfaction was immense and we were offered food and drinks from various people who had passed us on the way up. After plenty of high fives and self congratulation we started the downhill, what should have been easy was terrifying! We quickly pick up a lot of speed and our brakes are not great, my computer showing I reached 56kph before trying to slow down. We spotted a track off near some old ruins and decided to camp for the night and leave the remainder of the downhill for tomorrow! We found a stream to draw water and made camp, satisfied and exhausted at our days efforts.

Finally at the top! 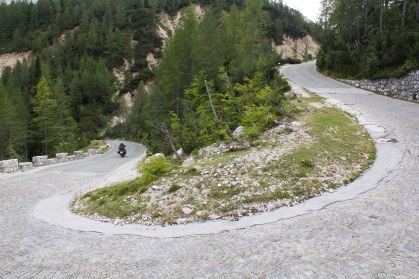 Bastard cobbles on the way up

The route profile for our day… a fair amount of climbing!