After spending an evening listening to some gobshite playing the accordian like it was going out of fashion, we skipped out of our campsite at an early hour and unfortunately didn’t get to pay as there was no staff present. As terrible as that may seem, we offered to pay when we arrived but they were having none of us. And sure we all know that time will wait for no man so off we pedalled! Following an unpaved track, we watched the sun light up the surrounding hills, leaving some in cold blue shadows with surreal looking pockets of mist. We stopped in Tolmin for a coffee and a life sustaining burec. They really are the quick stop, fill you up food. They do tend to vary in quality but these ones were a solid 7 out of 10. 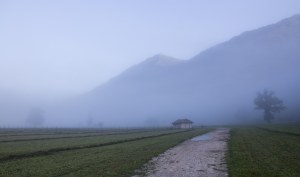 As we headed for Idrija, we found ourselves pedalling through some road construction traffic. This meant that every few kilometres we had to negotiate a one way traffic system. This is ok if you’re in a car. There’s very little danger you will fail to complete the length of it before the traffic on the  other side gets a green light and comes charging towards you. But on a bike it feels like some kind of bizarre race. When the light turns green, you have to pedal hell for leather so that you don’t meet cars coming in the opposite direction on a piece of road wide enough for barely one car and all this time we are kept from falling down a 100ft drop into the river below by knee high concrete posts every 10 metres at best and by iron bar and string at worst. All in all though, it’s quite a fun way to wind down the miles!!

Slovenia is a beautiful country…

At this stage, we have left the ethereal blue of the Soča river behind. The rivers we are following are still beautiful but lack the other-worldly quality of before. We’ve seen some strange things….. large cages used apparently to ferry goods via steel cables across the river. Some look large enough to carry livestock, but alas we are yet to see one in action.

Slovenia is a hilly country!

As we had been busy racing various traffic control systems, we found ourselves in Idrija with plenty of time to spare. Our main aim in coming here is to visit the mercury mine that operated here for 500 years. Tickets secured, we headed off to see the tourist office where you’re not allowed to touch anything. We beat a hasty retreat and went for a coffee before our tour started.
We were shown an interesting movie about the mining past, mercury and the history of Idrija and then dressed up like a pack of little gnomes in hardhats and overcoats before we headed down the mine.

Mining eventually came to a halt here after 500 years as the EU have declared it unsafe. And rightly so, despite a lack of actual workplace deaths, many of the miners died slow, painful deaths due to mercury poisoning . At it’s peak, the Idrija mine was the second largest producer of mercury in the world with over 700km of minibg network in use. Nowadays there are still a handful of miners that work there maintaining the mine and backfilling where material compacts. During our tour we saw some raw mercury. It really is the craziest looking stuff, sitting in little globules on the rock. The tour was interesting, but by far the most entertaining part was hearing a loud thunk as yet another person forgot the mine wasn’t very high! We travelled 97m below ground level, heard some dodgy sound effects in lieu of actual dynamite explosions and found out all about an elf that used to live in the mine and tell them where the mercury was or alternatively tricking them into looking in the wrong place depending on his mood. Sounds like a bit of a dick if you ask me. 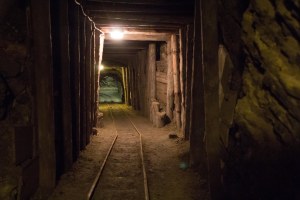 One highlight was at the end of the tour when the guide handed us two beakers. One contained a kilo of mercury, and the other the equivalent volume in water…. just 70ml. Having a liquid so dense in one hand with only 70g of water in the other was quite a bizarre feeling, and the historical fascination and draw to the material was made a little clearer.

Tour done,  we headed to the local crappy Mercator to see what was on offer. Goods secured, we set off in search of a camping spot. While Sam was checking out a wood across the river, a woman wandered out if her house, eyed me up, and said “camping?”. When I said yes, she beckoned her neighbour over and (I assume) asked him to show us where to camp in the woods. He popped his dog on a leash, strolled across the suspension footbridge and showed us where he thought was best. We returned to collect our bikes and Sam did all the hard work, getting both up the stony, steep bank to a path, we then slowly negotiated our way down a gravelly mountain bike trails. And there we camped on a flat spot undisturbed,  feasted on chicken and saw no owls.