This would never happen at home… once again we are amazed, not only at the kindness of strangers, but at the extreme levels of trustworthiness shown by people we have only just met. We are sat in some ones house, a beautiful house with a water mill in the grounds, an orchard with three acres of apples outside, a pressing house, a large vegetable plot, vast amounts of outdoors gear and just generally loads of amazing things. The front and back doors are wide open, the dog is mooching about and its 22.30. All sounds fairly normal so far, but after dinner the owner just jumped up and said he was off to work until 7am, explaining in broken English that we were welcome to anything and he will see us then! We had only just managed to meet up with him two and a half hours before so to say he barely knows us is a huge understatement. We have an endless supply of freshly pressed organic apple and just shelled walnuts at arms reach to last us the night!

Silvio is our second warm showers host and lives on the edge of a small village in rural Slovenia. He is 43 but looks much younger, no doubt a by product of his vegan, no drinking and organic lifestyle. For anyone with off the grid living aspirations, this place would be heaven. For the last 15 years he has been honing his ability to live off the land with minimal outside requirements. He has farmed all sorts but now mainly focuses on organic apples and making juice for them. He built the house and mill himself, grinds his own grains to make breads and is fitting a hydro generator. The mill is powered by water taken from a small stream into a pond which he has made. He doesn’t use a car and travels everywhere with a bike. All in all its been fascinating speaking with him and learning about his various attempts and failures at living through organic farming… and now he is at work and we have this large amazing set up around us to spend the evening!

To balance this lovely evening we of course had to have had a shit day. We left our hotel in Zagreb fairly late and had to negotiate heavy traffic and narrow roads for a considerable amount of time. Zagreb has some fairly large hills to the north and south so is built on an east west orientation, as a result there are not many main routes into the city. We chose one which looked like it may be quiet, or at least easier to cycle along but it wasn’t. The road was busy and the attempts at cycle paths were frustrating as they constantly threw obstacles into your path such as large curbs and lamp posts. It was slow going, endless traffic lights and route checking meant that we were not out of the city until at least 2.30. There were regular heavy showers requiring constant jacket on jacket off cycles.

Our plan at the moment is to head back into Slovenia in order to do a large circuit of the country. It looks like a beautiful place and in our dash for Zagreb we didn’t have a chance to enter the areas we are interested in exploring. Our crossing point between the two countries was almost in the middle of a village, the passport control seemed out of place but no more than a glance was required and we were on our way. Its strange how motorists tolerance of cyclists can change so rapidly, but as soon as we were over the border, sharing the road was much easier. It also became more quiet and the scenery more interesting. Larger mountains are looming on the horizon, with an abundance of small vineyards, orchards and smallholdings filling the area surrounding us.

Silvo of course does not have internet at home, only at work. After our initial email exchange we were not able to contact him for a while, but I did send a message to say we would be with him at about 5ish. We found his house at 6, and although the keys were in the door he was no where to be seen. We waited and waited until I eventually found him in an orchard at about 7.30, I think because he hadn’t heard from us in a few days he was unsure if we were still on our way. After greeting us he plied us with the most amazing tasting apple juice and knocked up a vegan meal of salad from a nearby meadow and a type of millet falafel. It was following this that he just jumped up and said he had work in 30 minutes and had to leave! Despite being a vegan organic farmer, he had not quite managed to fully balance the books so also had a day job, working in a warehouse for Slovenia’s only nuclear power station… quite the contrast! 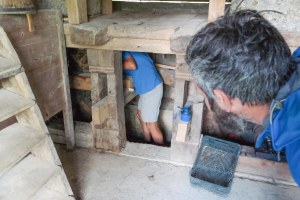 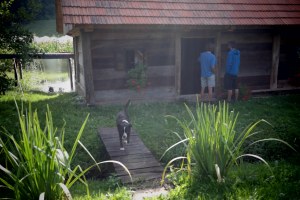 Silvo and his watermill.

Silvo and his watermill.