Back in Zagreb after an amazing weekend at home, it was surreal flying home from here knowing we were coming back in only three days, the complete reversal to the usual way a trip abroad works. Our flight was full of complete idiots, characters like ‘Pru’, unsurprisingly from Durham university projecting her voice while her mouth was crammed full of pastries talking like a complete twat about how drunk she had been and her holiday escapades. It just made us cringe, posh drunken brits abroad has to be the bottom line when it comes to tourism. Also reminds me why Durham is an awful place to have to spent any time.

The party and getting to see everyone was amazing, it was incredible how much effort everyone had put in and how amazing the house looked. A Moroccan theme complete with belly dancing, henna tattoos and Moroccan food while tasted out of this world. My Dad and sister (plus Matt the laborer/coffeman/babysitter!) making a real A-team, a combination of impeccable planning and creativity leading to a transformation that would have been beyond anything we could have imagined! An amazing job and a great night was had by all. We didn’t seem to have much of a chance to speak to many people, the night went past in a blur! 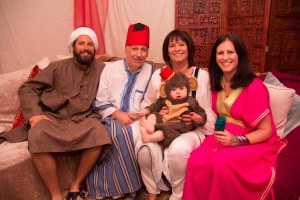 Anyway, skip forwards… Back to Zagreb and we found our way back out to the host who had been looking after our bikes for us, we arrived back later than expected and we were offered a place to stay for the night again and we gratefully accepted. It was nice to catch up again and spend an evening talking and learning about each other.

Zeljka, our host in Zagreb.

Our plan this morning was to head into Zagreb early in order to find a place central to stay and see some of the museums we traipsed around on the bank holiday when everything was closed. The two airbnb contacts hadn’t replied to us so we were left with no choice but to stay in a hotel. I say hotel, it may have been one in 1970… currently it is a crumbling shell of its former self. Half the light bulbs on our floor no longer function, the carpet doesn’t reach the wall and the ‘restaurant’ looks like it would have been a suitable meeting place for an important summit between Kennedy and Khrushchev. I’m fairly open to all forms of art yet I can’t seem to understand the picture on our wall… it looks like celery with tumors overlaid on discarded wallpaper. Sheena says floral vomit on 80s wallpaper. I’m not sure if we should laugh at the lamp or take it home to auction it. To be fair the receptionist was exceptionally nice, and past charm can be seen, especially in the old areal photos showing its previous forest location. These days I imagine it is bypassed by most western visitors and is frequented mainly by Russians, for whom it is probably a welcome miserable nostalgic trip down the drab memory lane that excites them, the only negative being the previously mentioned friendly receptionist. “Smiles were not allowed in our day”.

Zagreb was much nicer when it wasn’t a bank holiday, the streets were vibrant with cafes and bars taking up much of the pavement space. We managed to make it to one museum, the museum of technology. At 3pm we were just in time for the tour downstairs into the mine, a reconstruction of the technology and materials used throughout Croatias many past coal mines. It was well done and with a bit of imagination we could well have been deep underground. Almost straight after there was the Tesla display and demonstration – alone this was well worth the £1.50 entrance fee. Despite having no idea what the lecturer was saying, machine after machine was pulled in front of us as various electrical phenomenon were shown in an almost with an almost magician element to it. Somehow electricity was passed wirelessly between two huge brass orbs, between thin air lighting up a strip light from a rotating machine and other equally impressive things. I was fiddling with my camera and had zoned out slightly through a longer stretch of             Croatian until I vaguely remember the guy counting down.. three, two, one – A split second after one I lept a mile and almost shit myself as the darkened room was filled with an ear splitting crackling of energy and a huge blinding arc of electricity bridged between the separate components of the Tesla coil that was at the back of the room. The sound and sight was seriously impressive as it was left on for about 15 seconds, the energy in the room was palpable as all the hairs on your body seemed to stand on end. Really impressive! We spent some time after reading about various Croat scientists and walking through the big halls of collected machines and technological objects from across Europe and the former Soviet Union. 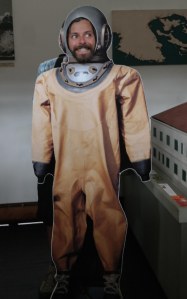 We enjoyed a few beers in the evening and retired to the luxury hotel in order to plan our next few days. We are heading back up into Slovenia in order to see the Julian Alps, an extension of the alps that protrudes south – our first full on mountain days which should be exciting!